29th September -The second place in Japan the students visited was Tokyo. They stayed in Asakusa,  a relatively quiet area of Tokyo reminiscent of ‘Old Tokyo’ on the west side of the city. This is also the location of the Buddhist Senso-ji Temple and the Edo-Tokyo Museum.

Compared to Mashiko this was a very different experience of Japan. To start with the scale was completely different and they quickly had to get to grips with the transport network of the subway rather than being able to walk to everything. The buildings also towered high above the horizon a marked difference many of the 2 storey buildings of Mashiko. The scale of Tokyo also meant there was an opportunity for smaller groups to be able to explore more independently. 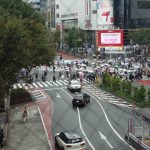 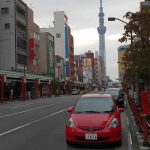 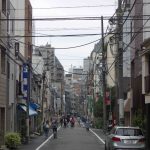 The Japan Folk Crafts Museum (the Nihon Mingeikan) holds a wide range of work in their collection. The collection of the museum consists a variety of craft works showing ceramics, glass, metalwork, wood work, painting and textiles from Japan, Taiwan, China, Korea as well as work from western countries. Ones surprising thing to see was the pieces of english slipware within the collection. The museum was founded by Soetsu Yanagi in 1936. The museum houses a collection on permanent display with a large room that houses a changing exhibition. Whilst the students visited the display was of Joseon White Porcelains from Korea. The museum does not have information panels explaining why and how it is curated and this is intended to allow you to experience it without someone else’s preconceptions, this was explained by the curator. The students were also shown around the West Hall which was Yanagi’s Residence. This was not open to the public during the visit but was specially opened by the museum curator. Unfortunately images could not be taken but it was an amazing space combining Japanese craftsmanship with some small western influences, for example, different patterns and proportions within shutters and Windsor backed chairs. S0me images can be seen on the Museum’s website. 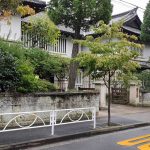 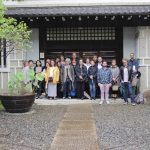 Group outside the Japanese Folk Museum 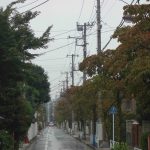 Street by the Japanese Folk Museum

On the same day a visit was also made to the Edo Tokyo Museum. The permanent exhibition is housed within a one very large space housing full sized models, artifacts and small dioramas. Here students learned more about Tokyo’s heritage and how it developed to be the place it is today from Edo. Including learning about the impact different natural disasters have had on shaping the city.  It illustrated Japanese culture and how traditional approaches have begun to change over time.  The museum has within its collection a wide range of Art and Craft including famous Ukiyo-E prints, fine examples of netsuke, ojimi and inro, alongside wood and metal work. The whole experience of the museum was tuley interactive offering a great insight in to the past, present and future of Tokyo. 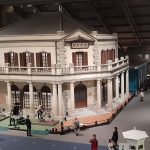 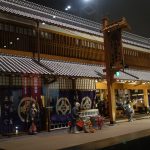 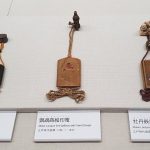 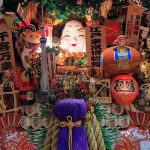 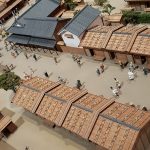 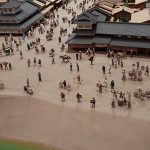 30th September – This brought with it the opportunity for time to look round Tokyo freely but also the forecast of a Typhoon blowing in during the evening. A number of students visited Tokyo Museum of Modern art and the National Museum to see more historical pieces of Art, craft and Pottery including pottery made by numerous National Living Treasures including Shōji Hamada, Tōshū Yamamoto and Uichi Shimizu. 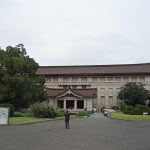 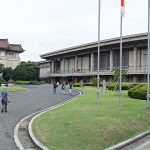 Others used this as an opportunity to explore some of the more well known sights and some of the shopping in different areas of Tokyo before the typhoon arrived. 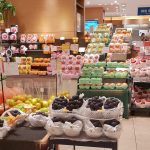 Fruit on sale in a department store 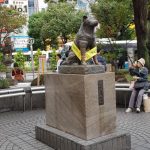 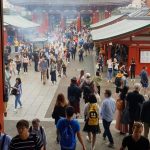 Stores around the temple 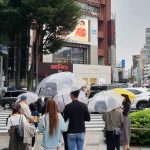 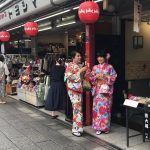 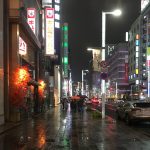 1st October – The final morning in Japan was spent exploring the area more directly around the hotel including the Buddhist Senso-ji Temple. 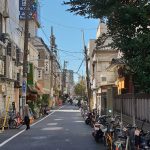 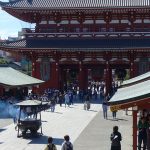 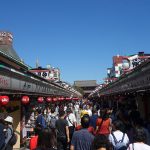 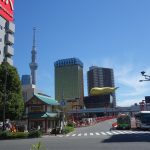 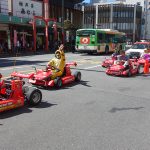 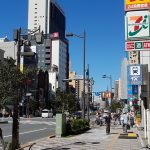 The whole experience of visiting Japan has given all involved a new appreciation for the importance of high level skill and making within Japanese culture. They are memories and experiences that will continue to influence the potters, may be only subtly with a different approach, technique or tool.

As a College the trip has cemented relationships that will continue to foster opportunities for potters and ceramicists on both sides of the world.

“What a wonderful the trip to Japan- Mashiko and Tokyo both! We were treated to a red carpet tour of potters workshops, museums and educational establishments. Ken and his friends guided us and organised everything.  The impact to my practice is likely to be subtle but profound- becoming a hand-builder now seems feasible. A big thank you to Lisa, as her contacts and friendships were instrumental.” – Eva, Student

“It was a truly inspirational visit. The most important part is giving the students a more fundamental understanding of culture on ceramics and the importance of traditions. ” – Kevin, Course Director

“What struck me most about ceramics in Mashiko was how subtle and organic the forms are. I also liked the contrast between subdued and bright splashes of colour that is used to beautiful effects. I could appreciate how sublime Ken Matsuzaki’s work is even more by getting an exposure to this distinct quality of Japanese aesthetics in ceramics.” – Zeba, Student

“Our trip to Tokyo and Mashiko was a fantastic once in a lifetime opportunity to visit some of Japan’s most famous and inspiring potters in their own setting. This is an experience that will influence the development of my work and how I set up my studio.” Paul, Student

“Mashiko had an air of tranquility and a beauty in its calm surroundings; along with the opposing busyness and colour of Tokyo. Japan felt like a haven for subtle creative stimulation and i just itched to get on a potters wheel and throw. ” Elaine – Student

This project was supported in part by Daiwa Anglo-Japanese Foundation 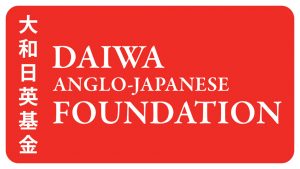 Due to the current restrictions, the Clay College and Gallery is sadly closed until further notice. Please note that any orders placed whilst we are closed will be sent out when we return, so please expect a delay. Thank you for your support! Dismiss